BOSTON, MA, November 3rd – Brian Worrell declared victory in his bid to represent District 4 in the Boston City Council. Speaking to a group of volunteers and family members at his parents’ residence in Dorchester, Brian thanked his supporters and emphasized the importance of community-driven campaigns. “I stand here because of this district’s dedication to the community and I want to thank the volunteers who took on leadership roles, knocked doors, and made this a collective effort,” Worrell said.

“We ran this grassroots campaign for the people of District 4, disregarding the status quo & special interests that have not benefited our community. We heard District 4 residents loud and clear that issues of better city services, affordable housing, public safety, elder services are issues that they look to members of the City Council to help tackle. We have a long road ahead and people want change, a new direction – people want to tackle the city’s toughest challenges with integrity and equity. I am ready and eager to work hard for you in building and strengthening our community and making District 4 a place where everyone and anyone can thrive. I will make it my mission in City Council to make this District better for all.”

Worrell ran a people-driven campaign in District 4. Evandro Carvalho was a formidable opponent. Brian wishes him success in his future endeavors and hopes to have his support in advancing real solutions and opportunities for D4 residents. “It has been a long campaign and I thank you all for your support. From the countless phone calls to the hours and hours spent going door to door in our community, your efforts have made this campaign a success. I’m grateful to have had all of your help by my side. Evandro added to this community-driven process and added to my understanding of what is important in this district. The example he set for our community is inspiring, and I look forward to supporting him in whatever he chooses to do next.” 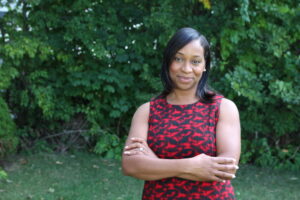 “Throughout his campaign, Brian has listened to community and responded with specific ideas to tackle the systemic inequities that our neighborhoods disproportionately experience and to continue the work I have been blessed to do on the Council, from expanding youth programming to activating vacant lots for housing and retail space our community can afford,” said Campbell. “I am excited by Brian’s inclusive leadership and vision for our district and proud to endorse him in this race.”

Announcing Councilor Campbell’s support, Worrell said “In a few short days, residents from across District 4 will decide the future of our district. I have said all along that success of our community depends on each member of the community and not any one person and that is why I am excited that a beloved member of our community is supporting my candidacy.  I am honored to have Andrea Campbell’s support. Throughout her career of public service, Andrea has always led with steadfast commitment to uplifting the people of district 4. She has fought for police reform, affordable housing, youth development, improved constituent services, and climate justice. I intend to continue where she is leaving off and would make sure that my office make gains on her many accomplishments.”